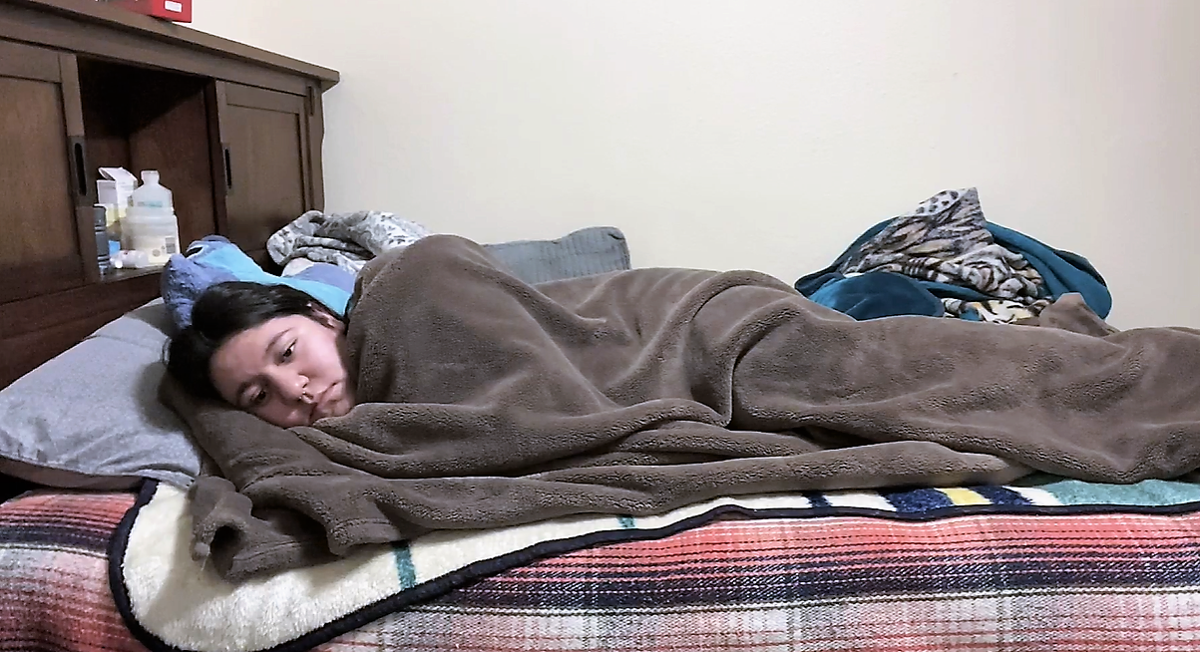 Jurupa Hills High School sophomore Kashmir Garnica won a regional first-place award from the Directing Change film project for her suicide prevention film, “Keep an Eye Out.” Garnica’s film shows how families can help out during a time of crisis. Garnica was awarded a $500 cash prize and her film will advance to the state finals.  (Contributed photo by FUSD)

Jurupa Hills High School sophomore Kashmir Garnica won a regional first-place award from the Directing Change film project for her suicide prevention film, “Keep an Eye Out.” Garnica’s film shows how families can help out during a time of crisis. Garnica was awarded a $500 cash prize and her film will advance to the state finals.  (Contributed photo by FUSD)

Jurupa Hills sophomore Kashmir Garnica won a regional first place award for her suicide prevention film, “Keep an Eye Out,” and will advance to the Directing Change state finals.

Junior Kimberly Do earned an honorable mention in the Directing Change statewide Hope and Justice category for her film, “Racism is the Real Virus.”

“These awards are reflective of the tremendous work being done by our TV Production students,” Jurupa Hills media instructor Jhoann Acosta-Idda said. “Mental health matters and racism are topics that resonate with our students, as many of them have seen firsthand what their friends and family are experiencing. Their passion in telling the story is what makes these films special.”

Employing a powerful series of camera angles and quick cuts, “Keep an Eye Out” follows a high school student who is showing signs of stress, anxiety and depression and withdrawing from her family. Recognizing her daughter’s actions as potential signs of suicide, the mother comforts and embraces her, letting the daughter know that she is loved and can talk to her about anything.

“Keep an Eye Out” is the first film Garnica has produced for Directing Change, which awarded her a $500 cash prize. Garnica was motivated by the opportunity to spread her message to a wider audience. Using techniques and strategies she learned in TV Production class, Garnica meticulously planned each shot on a storyboard.

“Suicide and mental health are issues that families have difficulty discussing. My mom and I are very close, and I want to encourage more families to talk more and not push it away,” Garnica said. “I’ve learned so much in class, how camera angles, lighting, editing and music have a major impact on the outcome of the film. I’m excited and nervous about advancing to the state finals.”

----- IN "RACISM IS THE NEW VIRUS," Do shares family stories of racist experiences and stereotyping, including harassment, intimidation, and bullying.

Correlating these experiences to the rise in hate crimes affecting the Asian-American community since the beginning of the pandemic, Do issues a call to action for support to stop the spread of racist thought.

“My family and I have all encountered some form of racism in our daily lives. I had to convince them to participate in the film, but it is important to turn this into a positive experience,” Do said. “This was my first film for Directing Change and I learned a lot. There is so much you have to consider -- audio levels, continuity, framing. I am very happy with the result.”

• Nicholas Brambila and Johann Chavez: “How to Help” (Suicide Prevention)

• Gabriela Rivarola: “You Are Not Alone” (Mental Health Matters)

If you are experiencing an emotional crisis, are thinking about suicide or are concerned about a friend call the free, 24-hour National Suicide Prevention Lifeline immediately: 1-800-273-8255.