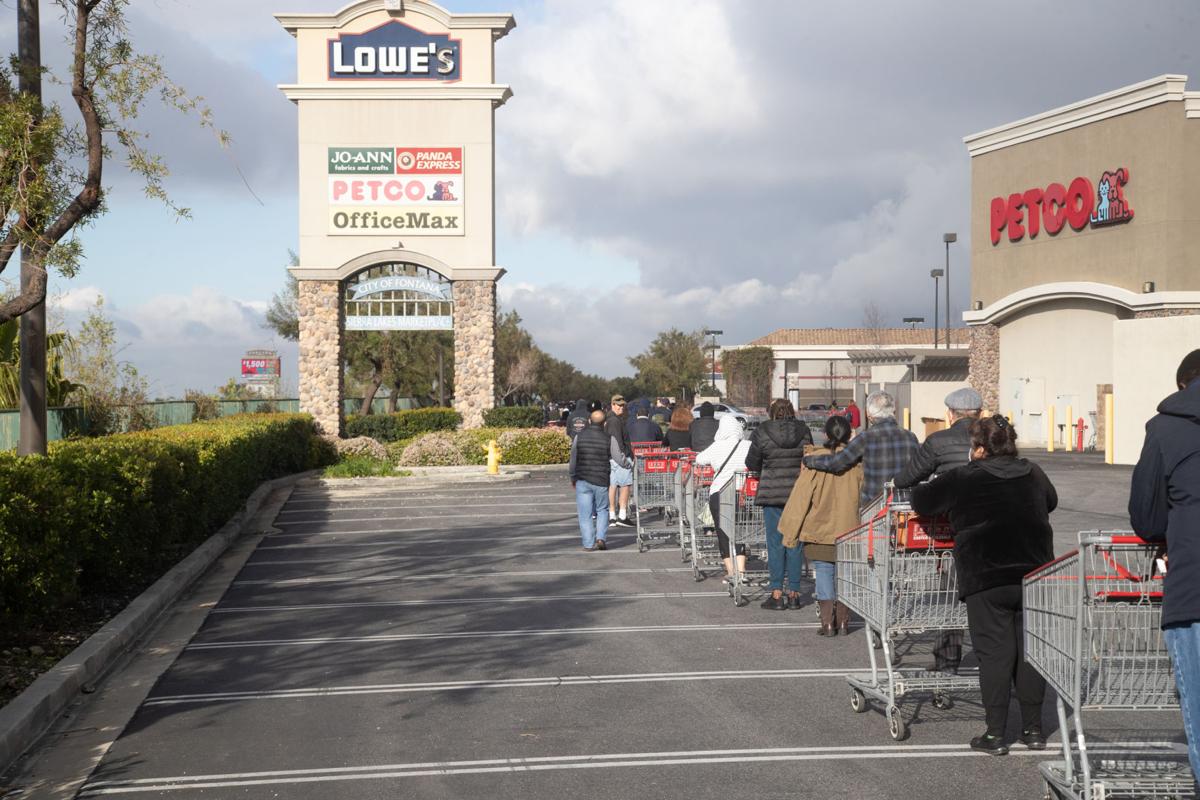 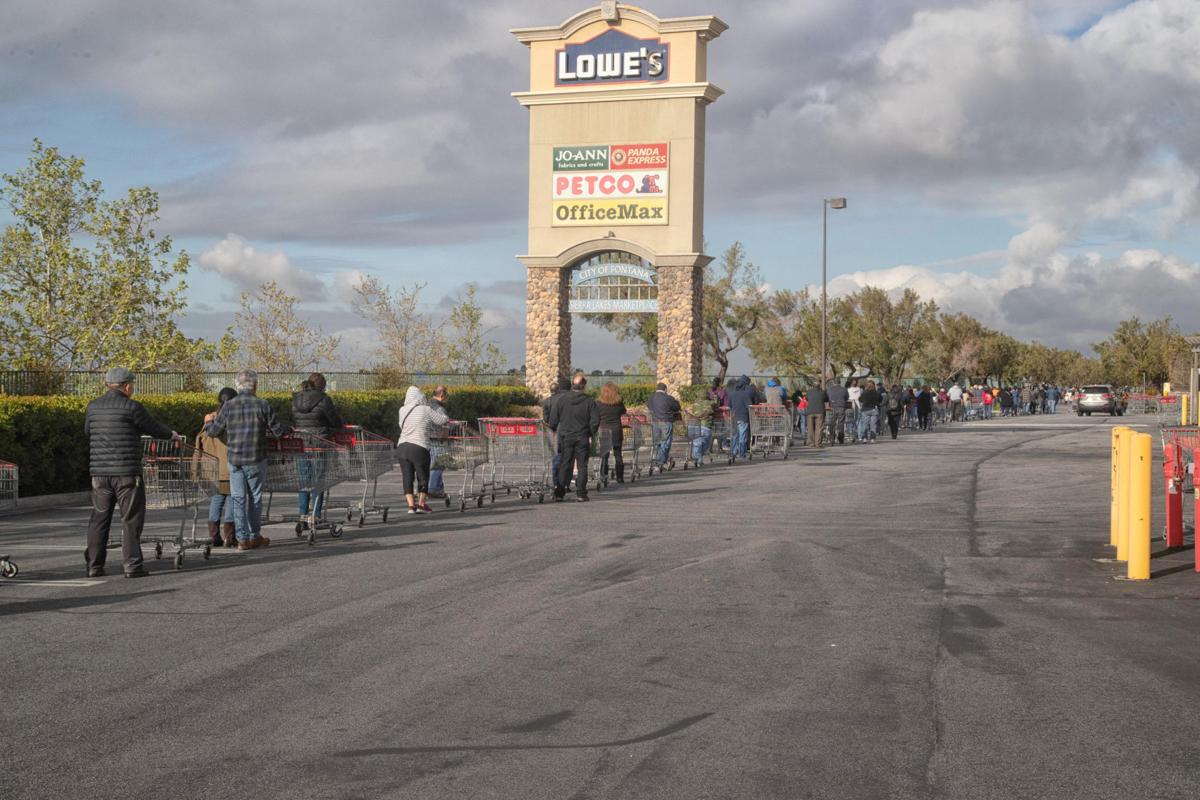 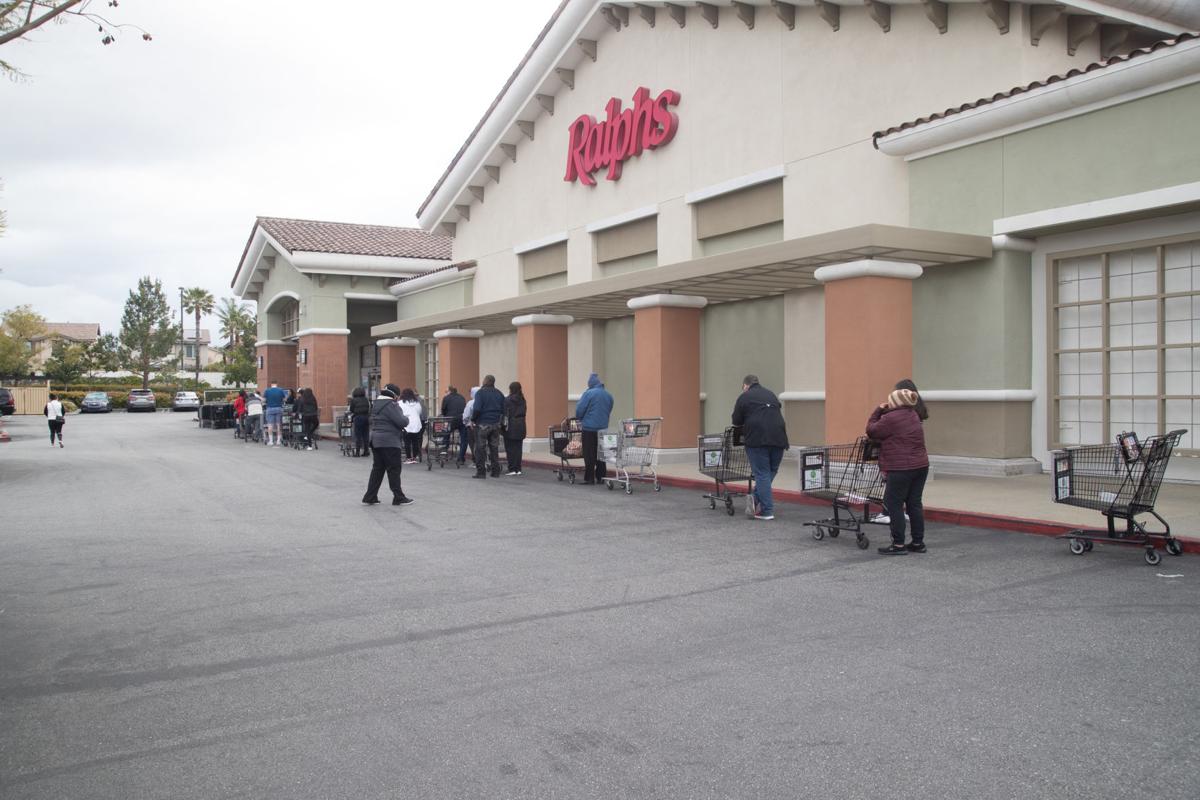 In contrast to the line at Fontana's Costco on the morning of March 24, the line outside the nearby Ralphs store during the same time period was relatively short, and all of the customers were practicing social distancing.  (Contributed photo by Mike Myers)

In contrast to the line at Fontana's Costco on the morning of March 24, the line outside the nearby Ralphs store during the same time period was relatively short, and all of the customers were practicing social distancing.  (Contributed photo by Mike Myers)

In an attempt to help its customers during the coronavirus crisis, Costco announced that a special shopping hour for senior citizens has been implemented nationwide.

On Tuesdays and Thursdays, Costco members ages 60 and older can shop from 8 to 9 a.m., before the general population is permitted to come inside the store.

Many seniors are taking advantage of this temporary offer, and they are grateful.

However, on the first day of the new policy on March 24, concerns were raised after an extremely long line formed at the Costco at 16505 Sierra Lakes Parkway in Fontana.

The senior line stretched from the store entrance to the south, behind several other businesses, all the way down the street to Sierra Avenue, raising significant health-related questions.

Many of the seniors were standing outside in the cold weather for hours, and the vast majority of them were not following social distancing guidelines by keeping a safe distance (six feet) between each other.

On social media, some commenters expressed their displeasure with the situation.

"I just can’t believe all the people going shopping! This has been going on for almost three weeks at Costco! How do all these people have the money and storage?" asked Teri Hardy Cox on the "You know you're from FONTANA when …" Facebook page.

Karl Hotyek Jr. replied: "Until the insanity with bulk supply stores ends, I think people, especially the elderly, are better off at smaller local supermarkets. Less exposure and frustration."

Indeed, the Ralphs store down the street from Costco at 16225 Sierra Lakes Parkway (which also lets seniors in early) had a relatively short line early in the morning, and the customers there were faithfully practicing social distancing.

Christian Alvarez said on the Facebook page that he thought too many Costco customers were hoarding supplies.

"People still haven’t had their fill yet? That’s just selfishness and greed!" Alvarez said. "If the world is going to end it doesn’t matter how much food you hoard. Sooner or later you’re gonna run out and you’ll have to come out to whatever awaits outside."

San Bernardino County Board of Supervisors Chairman Curt Hagman said in a video message earlier this month that he understood residents' anxiety about COVID-19 and he is thankful that "virtually everyone" waiting in the lines has been courteous and respectful of others. Nevertheless, he added that hoarding is not necessary.

"Retailers have assured us all that they have plenty of supplies, and all levels of government concur that there is no reason to hoard," Hagman said.

At Costco, shortly after 8 a.m., the line for normal operating hours had about 200 people, in contrast to the several hundred in the senior line. Costco employees were checking the IDs of the seniors before letting them in the store.

Lourdes Bedolla was one of the happy senior customers. Bedolla said on Facebook that the Costco employees were very organized and the line went fast.

"I came at 6 a.m. and I just got out with everything I need. Thank you Costco!!!!" Bedolla posted.

Since us seniors only get paid once a month and my husband and don’t get paid till the fourth Wednesday of every month and after paying our bills we had to wait to go get anything. We are out of everything now and since we still don’t get paid till tomorrow we are not sure we’re to go get anything, He’s 80 and I am 70, we both are disabled so no way can we stand every long at all. I have congestive heart failure so rather not go anywhere any way but I ‘ve already tried to see if I can order online and all of the stores say you have to come in and try to get toilet paper in the stores online are sold out, So is hand sanitizers and bleach products, which I need along with Lysol. Sure wish people would only take what they need and not extra, maybe my husband and I could get what we need. I pray this virus will end soon, before anyone else dies!

I understand your frustration. I would like to encourage you to research local grocery delivery services that offer special discounts for senior citizens. I am looking into it after today's experience in that line from Costco. My mother cannot stand nor walk for long so I held her place in line. And we switched out when she got near the door. Luckily there was an electric shopping cart as well. We too follow the guidelines of only shopping for bare essentials and Costco is her usual place. She doesn't buy many things but some of those items are only available there. What frustrates me is that this article quotes people who automatically assuming it is for hoarding. I even called the store to inform them that the line stretched all the way to Lowe's garden area. They were shocked and not too long after a few police cruisers drove by to investigate. That it was cold and not many observed social distancing protocols, my heart ached for all the seniors. Once inside, my mother said things were quick and easy. They did a great job inside the store. Please let me or others know how we can be of help to ensure you get what you need with the minimal exposure possible. 🙏 stay safe and take care

I'm very sorry you're having to go through that. Here is the number to the Senior Information and Assistance line:

Senior Information & Assistance Program 1-800 510-2020. Hopefully they can connect you with a program that can help you. Please also contact Water of Life Church in Fontana. Here is the link to their help webpage https://wolupdates.com/get-help-give-help/ or call them at 909-463-0103 . Explain your situation to them and I am sure they will help or direct you to services that can help. God bless you!