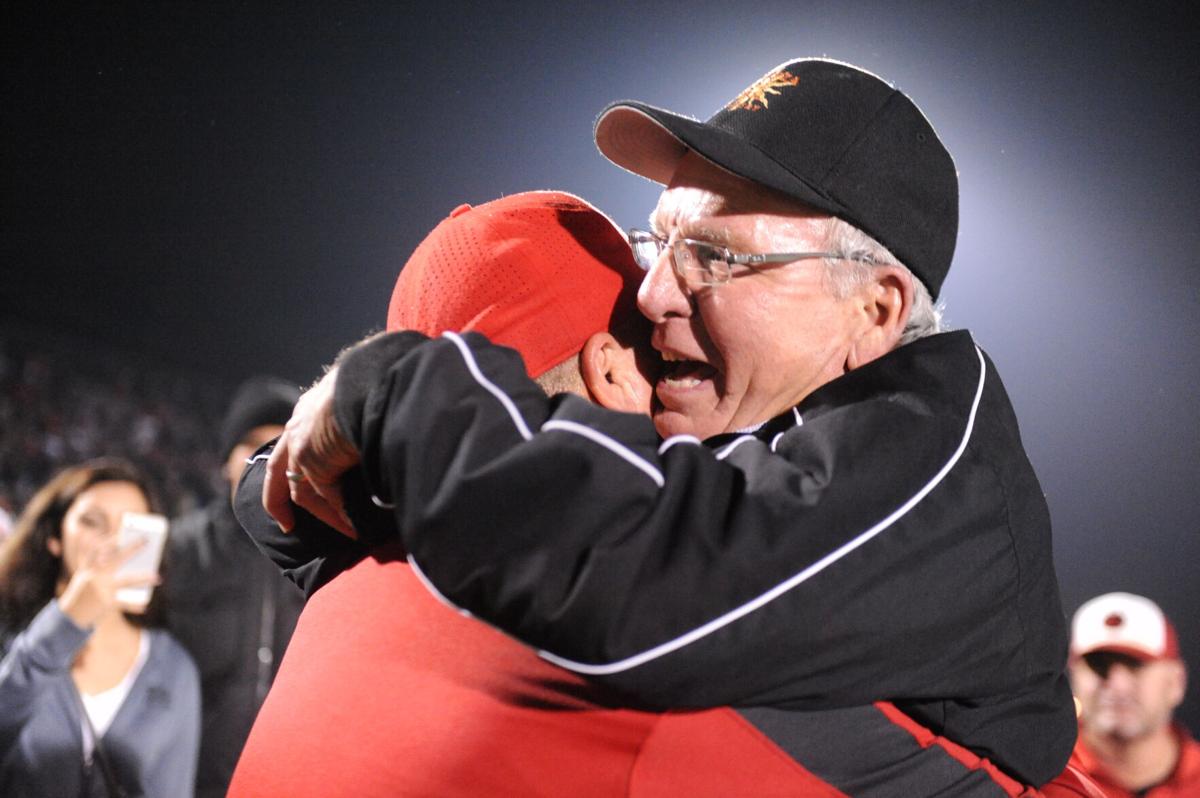 Dick Bruich has many fond memories of his successful coaching years at Fontana High School and Kaiser High School. But one of his favorite memories is when his son Kurt won the CIF title as the coach of Redlands East Valley in 2014; he embraced his son after the game.  (Contributed photo by Jerry Soifer) 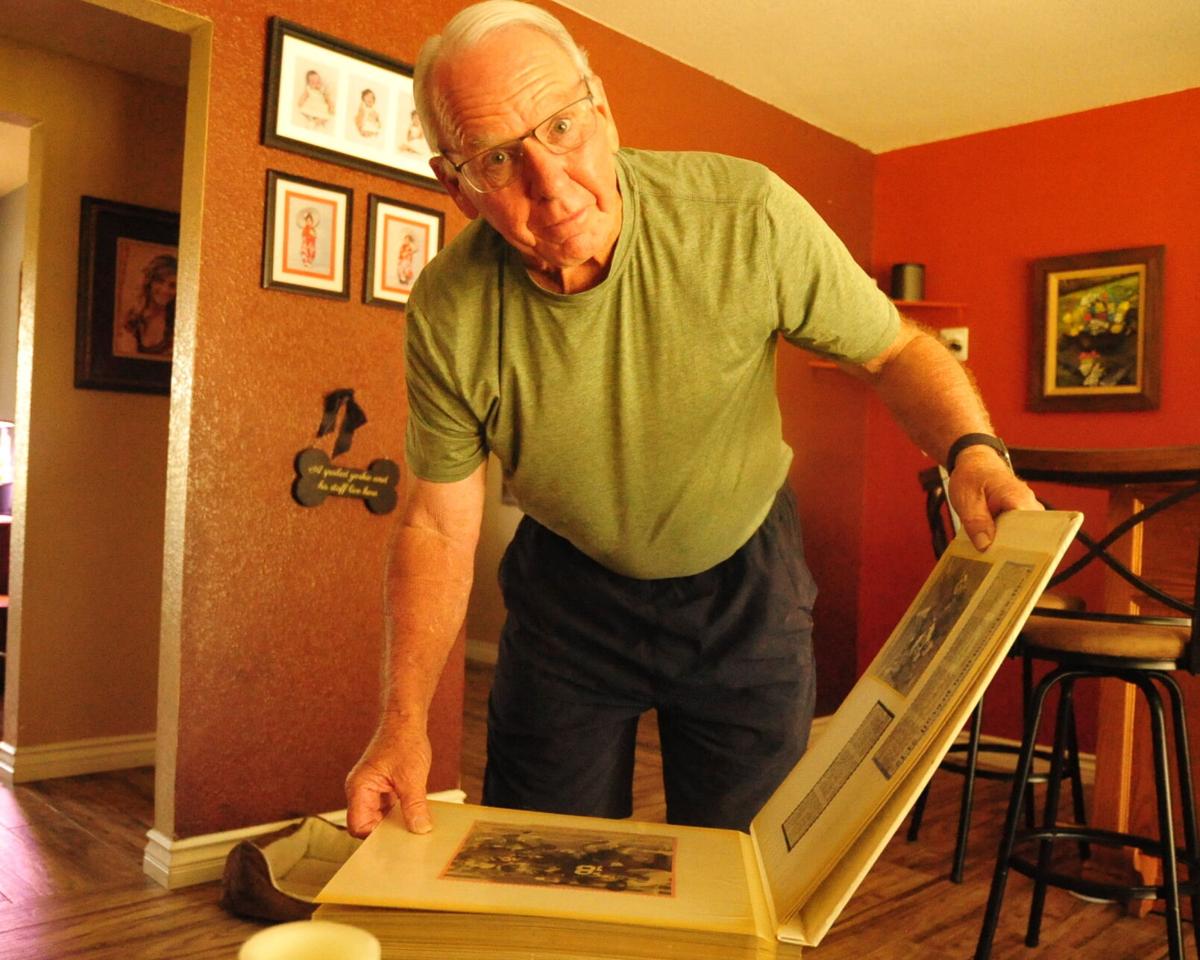 Dick Bruich has many fond memories of his successful coaching years at Fontana High School and Kaiser High School and has kept a huge scrapbook of newspaper clippings at his home.  (Contributed photo by Jerry Soifer)

Dick Bruich has many fond memories of his successful coaching years at Fontana High School and Kaiser High School. But one of his favorite memories is when his son Kurt won the CIF title as the coach of Redlands East Valley in 2014; he embraced his son after the game.  (Contributed photo by Jerry Soifer)

Dick Bruich has many fond memories of his successful coaching years at Fontana High School and Kaiser High School and has kept a huge scrapbook of newspaper clippings at his home.  (Contributed photo by Jerry Soifer)

Coaches will face challenges organizing practices when the daylight hours are the shortest, the weather can be the coldest and dampest, and motivating the players will be the hardest because attendance could be limited by pandemic regulations.

Practice is scheduled for December with games to begin in January. With the compressed schedule, football will not be the only show and college recruiting could be a confused situation.

A pandemic is one challenge Bruich never had to face. He was the head coach at Fontana from 1977-98. His tenure was highlighted by CIF Southern Section titles in the highest division in 1987 and 1989. His 1987 team was deemed national champion. He is proud of 12 10-win seasons that were frequently thwarted in the playoffs by parochial school teams.

While at Fohi, he yearned to start a program at a new school. When Kaiser opened, he took the job in 1999. He coached Kaiser to two CIF Southern Section titles and one state crown before retiring after the 2008 season.

He has not been forgotten. He was inducted into the section Hall of Fame in 2016.

CIF Southern Section Commissioner Rob Wigod said, "Dick Bruich is truly an icon in high school education and high school athletics. His success as a coach, in terms of championships and wins, is unrivaled, but beyond that, his impact on so many, many former players and coaches is immeasurable. His legacy lives on through all those who have benefitted from his guidance, including his son Kurt and daughter Kristen, who are very successful high school educators in their own right."

Wigod added, "Dick has been someone I have sought out for guidance and advice many times and he has always been there for me, making sure that the decisions we make are in the best interests of student-athletes, putting them first. I am proud to call Dick Bruich my friend and am grateful to him for all he has done in service to those who have had the good fortune to know him as I do.”

"I loved getting Fontana guys," said Meier. "They practiced hard. They were well disciplined and tough. Dick made good players great. They know how to block and how to tackle. Every Fontana kid I coached at Fontana was fundamentally sound. To Dick's credit, it was all about the team."

As a lineman at Riverside Poly in the 1980s, John Brandom beat Fohi. Now, the retired coach from Corona and Riverside Hillcrest is a fan of Bruich's.

"Playing Fohi back in the mid-'80s was incredible," said Brandom. "We knew that they were some tough SOB’s and that it was gonna be a blood bath."

Brandom helped Poly beat Fohi twice in 1984, once in the Citrus Belt League and once for the CIF title. Bruich said Brandom was one of the toughest players his team faced.

"Dick is a no-nonsense guy, and it shows with his teams on and off the field. He coaches hard, then loves them harder," Brandom said. "In my coaching life, Dick was always available and we have huge respect for each other. Perhaps most impressive is the legacy he has laid out. His kids have had tremendous success with athletics and coaching. His extended family, which I have also been privileged to know, are apples that don’t fall far from his tree. Dick Bruich is as genuine of a guy that you would ever meet."

BRUICH, 73, lives by the Canyon Crest Country Club in Riverside with his wife of 52 years, Cathy. They have three grown children and four grandchildren.

Kurt Bruich, 49, coached Redlands East Valley to a 36-33 win over Riverside Poly for a 2014 section title. Dick Bruich said he was more emotional over his son's win than any of his own.

Dick Bruich comes from an obsolete world of football. He wore a leather helmet and called signals from the blocking back position in the old single wing formation at Cantwell High in Montebello in the 1960s. He said one of his coaches became the role model for what he wanted to do with the rest of his life. He coached not only football but also softball and track and field.

He graduated from Cal State Los Angeles in 1969. He earned his credential by teaching for two years at St. Paul. He went to Fontana as the defensive coordinator for coach John Tyree. In 1975, Bruich was part of what he calls the biggest win in Fohi history, the first victory over Redlands after 19 losses and one tie.

Bruich coached against some of the best players in the history of the game when they were in high school -- Ronnie Lott of Eisenhower and Anthony Munoz of Chaffey.

As an assistant, Bruich witnessed a bone-rattling collision between Lott and Fohi's Reuben Henderson (who went on to play in the NFL) that left both players shaken. Bruich said the Steelers could never fool Lott, a future Hall of Fame safety.

Bruich said Munoz, a future Hall of Famer, amazed him with his ability to kick the football.

The 1987 team epitomized the local group of players who grew up playing Pop Warner football, scattered to the junior high schools and came back together at Fohi.

Bruich said specialized coaching and training has helped the players improve over what they used to be.

When Bruich started coaching, it was a major project to take game films to a processor after a Friday night contest and get them back Saturday to prepare for the next game.

He also used to go out every Saturday morning to buy seven or eight newspapers to save for his scrapbook and try to find information on upcoming opponents. He has a huge scrapbook of clippings at his home. Newspaper coverage has greatly dwindled since then.

Sometimes defeat is the best teacher. Bruich said he lost three straight to Riverside Poly in 1984-85 before he learned to defend the wing-T offense. He never lost to the Bears again.

Who will you vote for in the November election?

Coupons - Clip and Save!