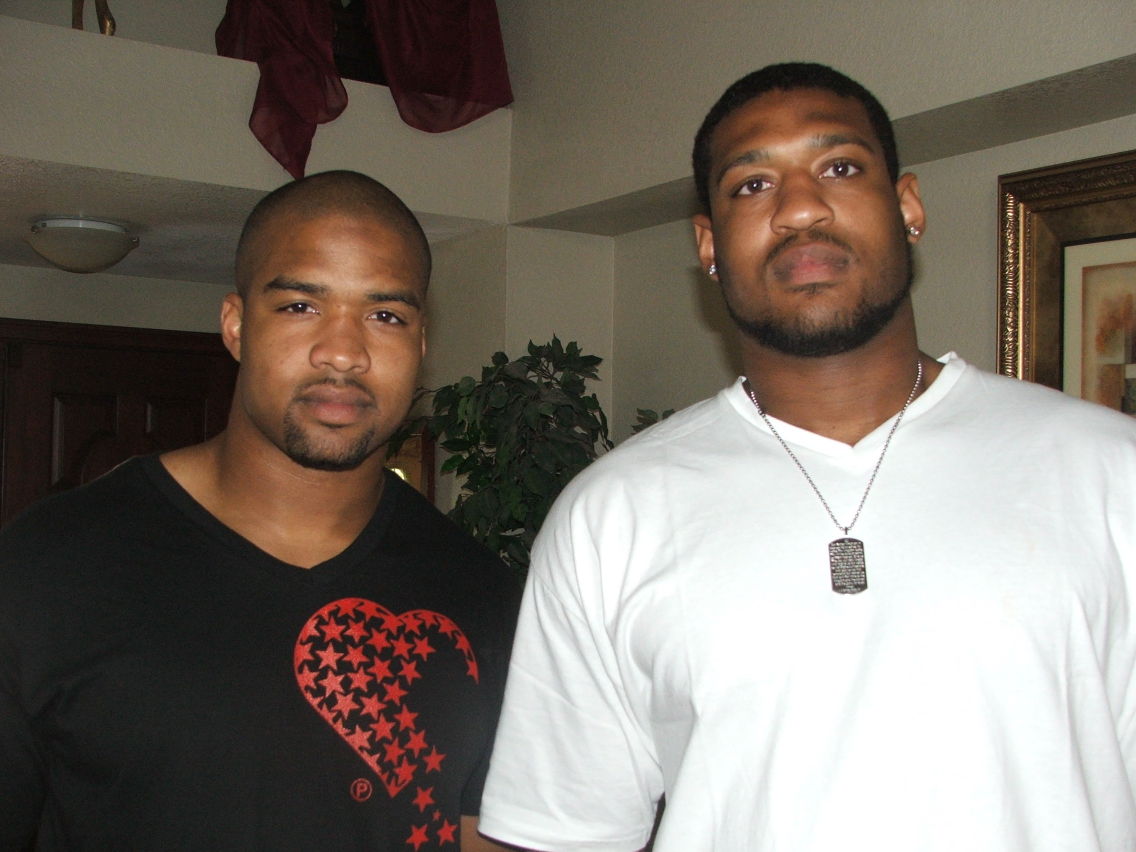 Former Kaiser High School players Chris Carter (left) and David Carter are pictured in 2011 after they were both chosen in the NFL draft.  David Carter is now with the Chicago Bears and Chris Carter plays for the Cincinnati Bengals. 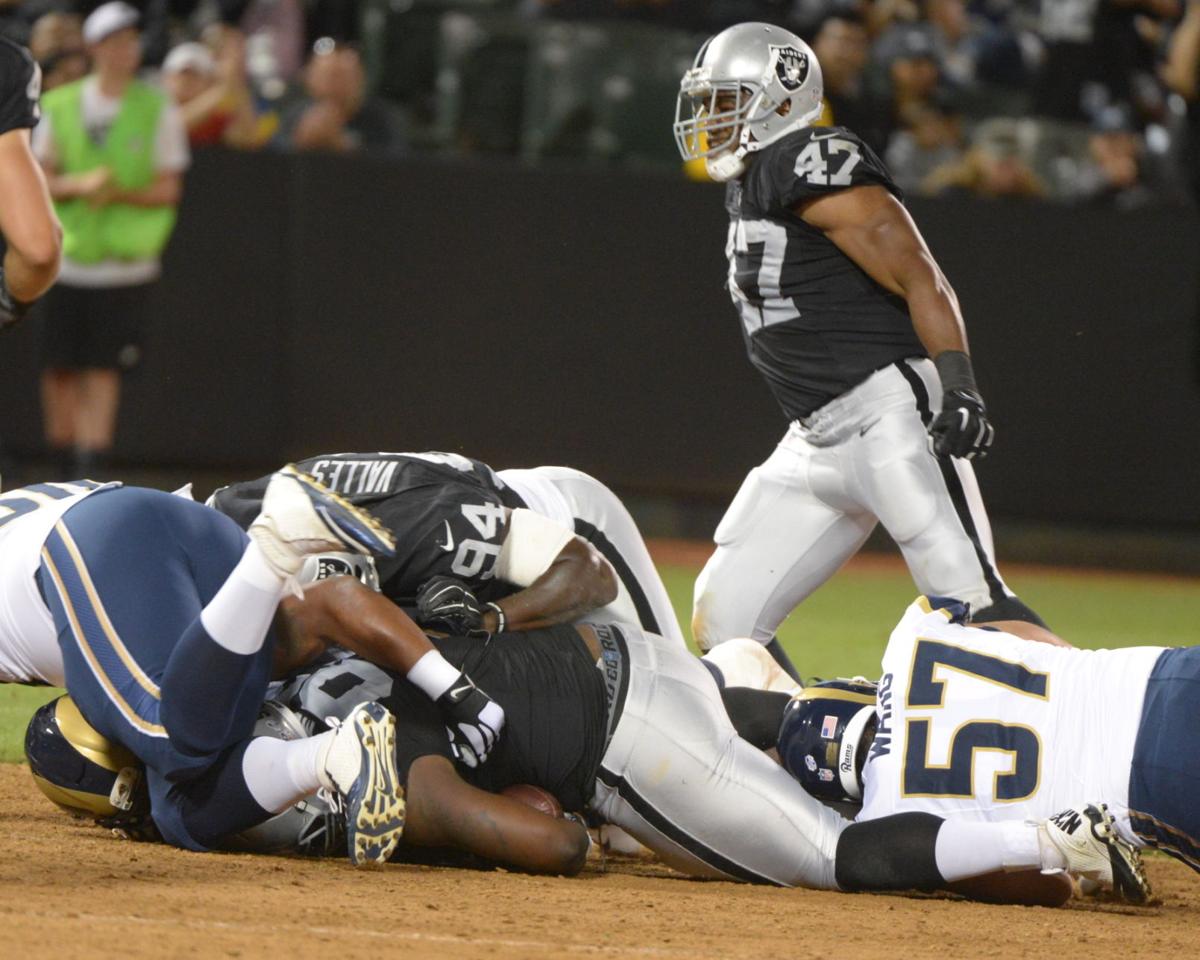 Former Kaiser High School player Josh Shirley, who is now on the Oakland Raiders' roster, runs toward the play during a recent pre-season game against St. Louis.  (Contributed photo by Jerry Soifer)

Former Kaiser High School players Chris Carter (left) and David Carter are pictured in 2011 after they were both chosen in the NFL draft.  David Carter is now with the Chicago Bears and Chris Carter plays for the Cincinnati Bengals.

Former Kaiser High School player Josh Shirley, who is now on the Oakland Raiders' roster, runs toward the play during a recent pre-season game against St. Louis.  (Contributed photo by Jerry Soifer)

Several athletes from local schools are now on NFL rosters, and one of them -- Kaiser High School graduate David Carter -- has gained attention for something besides his football skills.

Carter, a defensive lineman who signed a one-year contract with the Chicago Bears this month, has fully adopted the practice of veganism (not consuming animal products) and is an animal rights activist.

In fact, the 27-year-old Carter calls himself the "300 Pound Vegan" and has created a website devoted to his philosophy.

"Converting to a whole foods plant-based lifestyle was the best decision I could have ever made for my body, mind, and spirit," Carter said on his website.

Following the lead of his wife, Carter adopted veganism early last year and he said the results have been highly positive: "More energy, shorter recovery time, increased stamina, improved strength, and the peace of mind that no one had to die in order for me to live."

Plus, physical ailments that previously accompanied his football career have been curtailed, he said.

"Every one of my nagging injuries is gone. Tendonitis, inflammation, scar tissue, nerve damage, and chronic muscle fatigue all corrected themselves within months of adopting veganism," he said on the website.

He said that he constantly gets questioned about how he can stay strong and healthy without eating meat.

"I get all the protein I need (300+ grams/day) and then some from vegetables, grains, legumes, nuts, and seeds. So I really don’t want to hear that it can’t be done or that you can’t achieve muscle and weight gain on a completely plant based diet," he said.

Carter, who played college football at UCLA, was drafted by the Arizona Cardinals in the sixth round of the 2011 NFL draft. He played two seasons for the Cardinals in a limited role and also appeared in three games for the Dallas Cowboys in 2013.

Carter is thankful that the Bears have made adjustments to help him with his vegan lifestyle as he gets ready for the fall season.

"The Bears and the Olivet Nazarene University staff took the best care of me during camp," he said on Twitter recently. "They were up for the challenge from day one and prepared delicious off menu vegan items for me every single day."

Scientists say that in the animal world, some bears are carnivores, but many species of bears survive on a diet that consists largely of vegetation. In the human world, this Chicago Bear appears to be not only surviving, but thriving, because he is eating lots of veggies.

----- DAVID CARTER'S BROTHER, Chris Carter, also is competing in the NFL and is a linebacker with the Cincinnati Bengals.

Chris Carter, who played at Fresno State after graduating from Kaiser, was drafted in 2011 by the Pittsburgh Steelers and spent three years with the team, mostly in a reserve role.

He joined the Bengals last year and saw action in Cincinnati's pre-season 23-10 win over the New York Giants on Aug. 14, with hopes of contributing to the team this season.

The Bengals now have two players from Fontana on their roster; wide receiver Marvin Jones (an Etiwanda High School graduate) is looking for a big year in 2015.

Jones played very well in 2013, catching 51 passes for 712 yards and 10 touchdowns (second on the team in that category). However, he missed the entire 2014 season because of foot and ankle injuries.

On Aug. 29, the Bengals are scheduled to play the Bears in a pre-season contest, creating the potential for three Fontana players (both Carter brothers along with Jones) to be on the field in the same game.

----- THEN in the regular season opener on Sept. 13, the Bengals will travel to Oakland, where another Fontana native -- Kaiser grad Josh Shirley -- is trying to land a spot on the roster as a linebacker.

Shirley, who was signed by the Raiders as an undrafted free agent this year, made an impression in the opening pre-season game against St. Louis by sacking the quarterback and forcing a fumble.

Shirley played his senior year in college at UNLV in 2014 after competing for three seasons for the University of Washington.

What is the significance of Kamala Harris becoming the first woman and first person of color to be vice president?