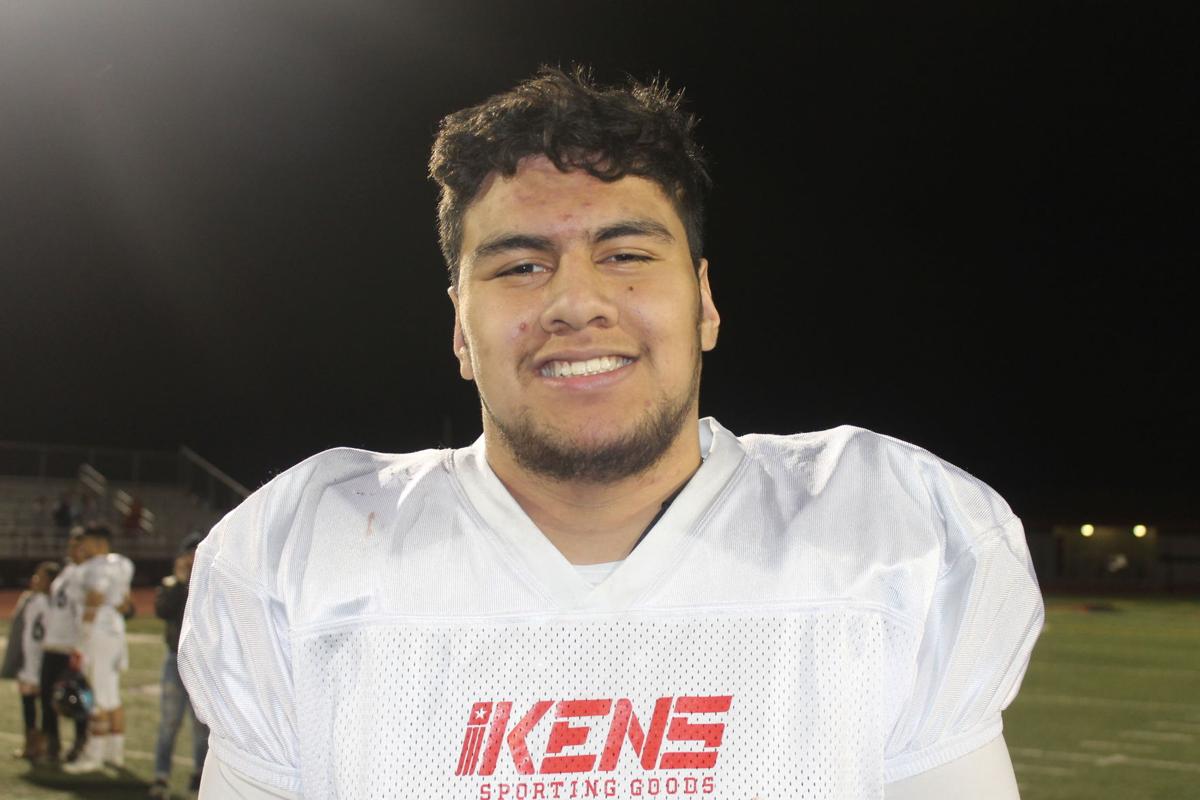 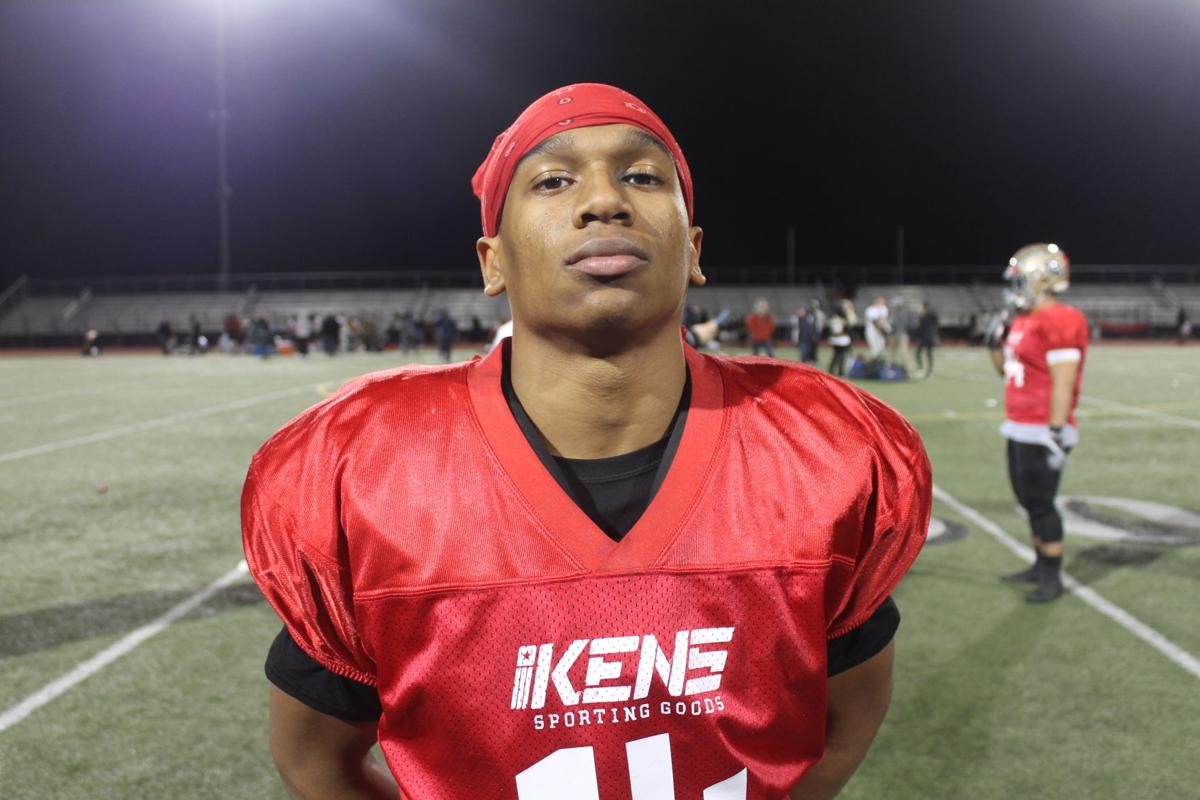 Kasmir Dina of Etiwanda scored a touchdown for the West team. 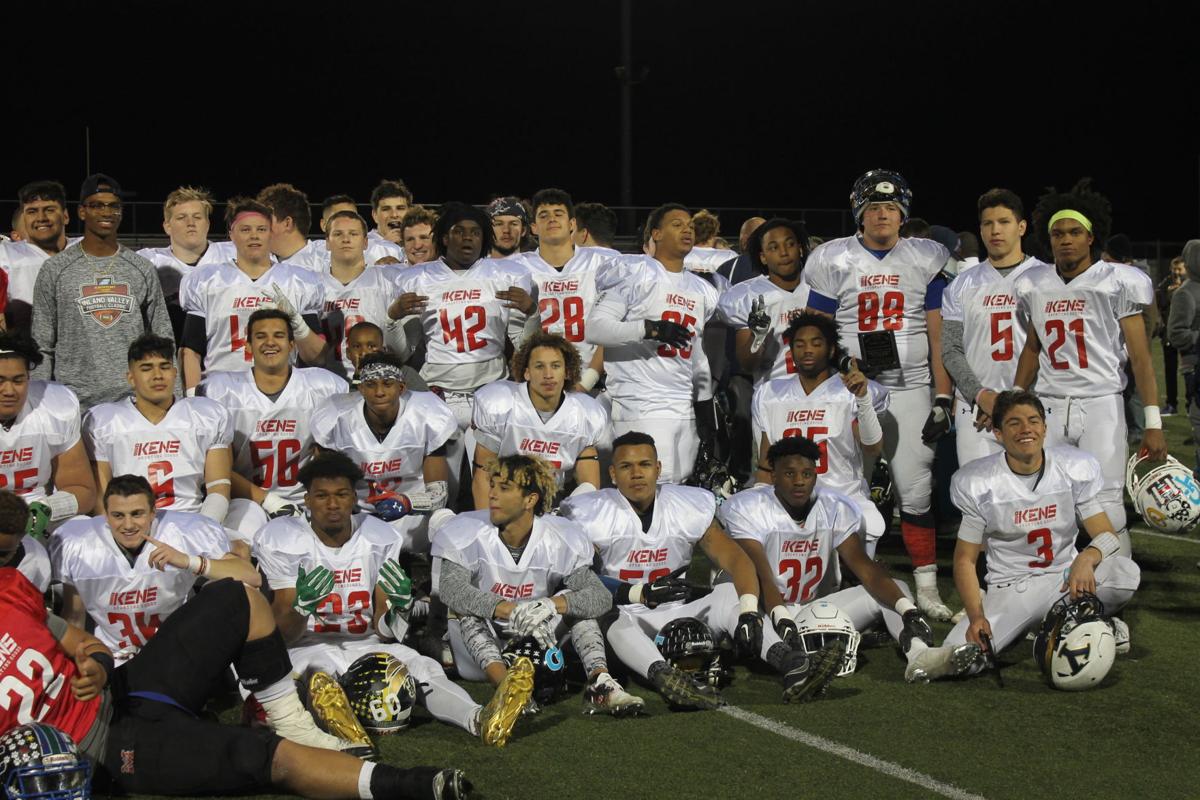 The Eastern San Bernardino County all-stars gather after the game. 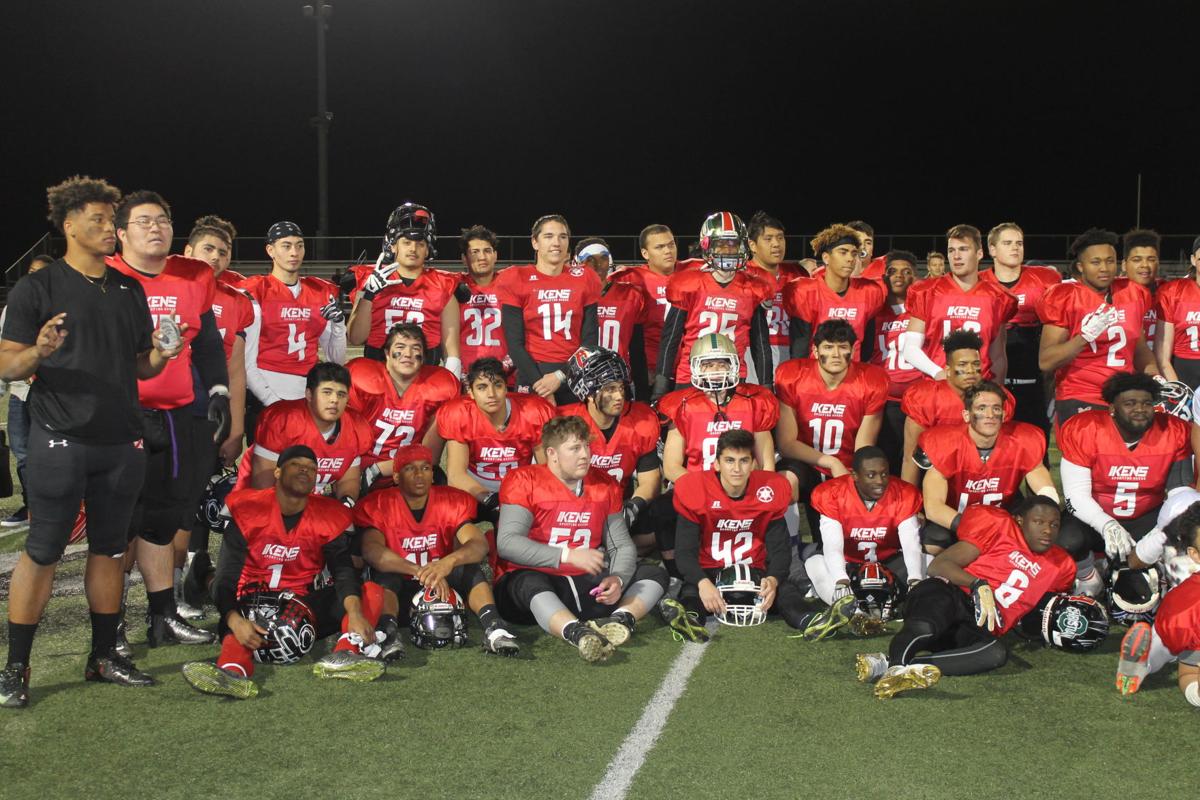 The Western all-stars gather after the game. 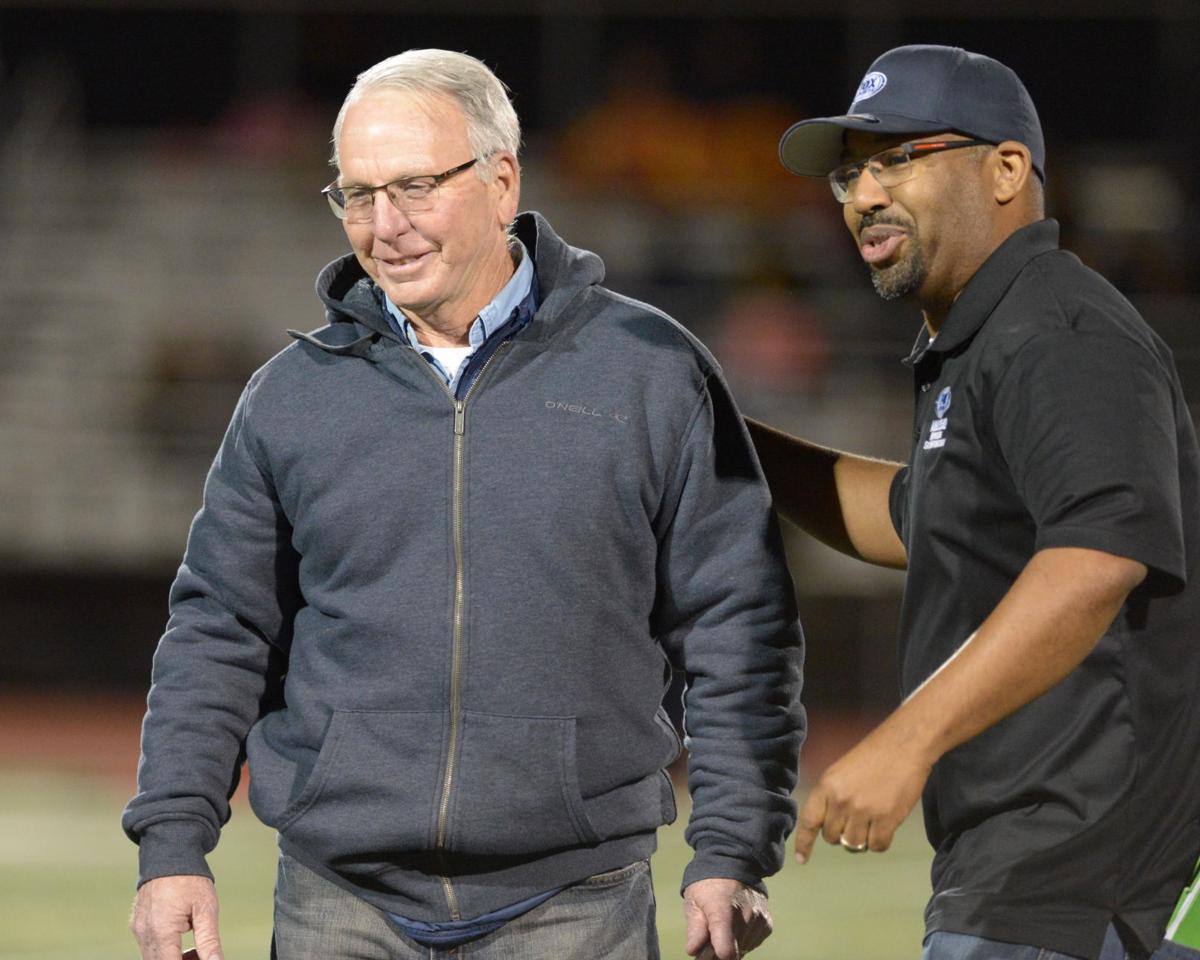 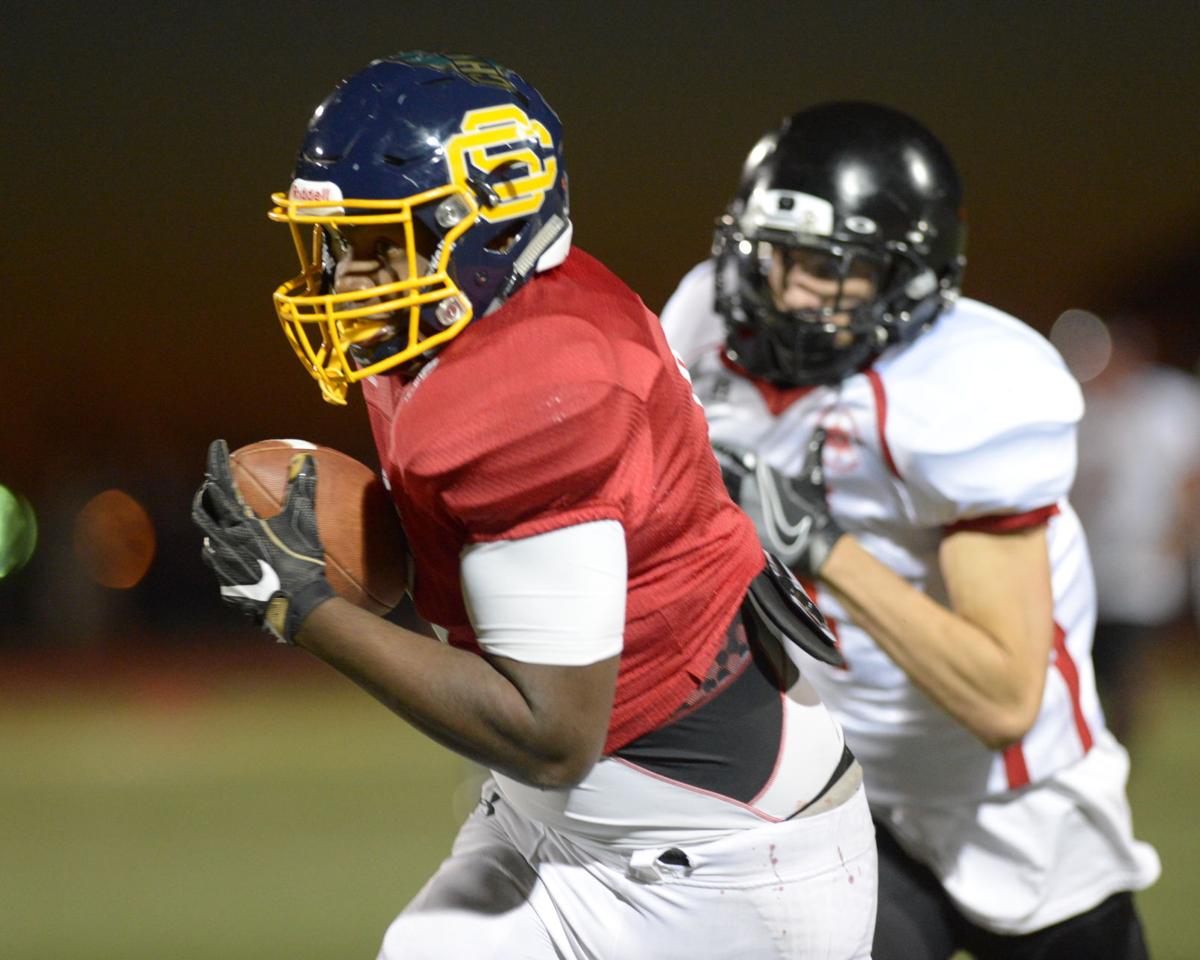 Edyon Batta (left) catches a long pass and runs in for the winning touchdown with two seconds left, giving the San Bernardino County all-stars a 20-19 victory over Riverside County in the 215 Football All-Star Classic on Jan. 29.  (Contributed photo by Jerry Soifer)

Kasmir Dina of Etiwanda scored a touchdown for the West team.

The Eastern San Bernardino County all-stars gather after the game.

The Western all-stars gather after the game.

Edyon Batta (left) catches a long pass and runs in for the winning touchdown with two seconds left, giving the San Bernardino County all-stars a 20-19 victory over Riverside County in the 215 Football All-Star Classic on Jan. 29.  (Contributed photo by Jerry Soifer)

The San Bernardino County Eastern all-stars held on in the final seconds for a dramatic 27-20 victory over the Western team in the Inland Valley Hall of Fame Football Classic on Jan. 29 at the Fontana A.B. Miller High School stadium.

Pantoja was one of several players from schools in Fontana (as well as Etiwanda High School) who displayed their skills in the game, which was scoreless at halftime but then featured lots of offensive explosiveness in the second half.

Etiwanda's Kasmir Dina, a running back on the Western squad, said it was a "great honor" to play in the "amazing" game.

"It gets everybody together and shows the true talent that we have all around this city," Dina said.

The Eastern group never trailed on the scoreboard, but the West had one last chance to come back in the last minute. Thanks to a couple of big receptions by Cam'reon Dean of Summit, the West drove to the East 14-yard line with one second left. However, a pass into the end zone fell incomplete as time ran out.

At the start of the third quarter, the Easterners broke through for three quick touchdowns to take a 20-0 lead.

The most entertaining TD came when quarterback Nathan Martinez (who was later voted the Offensive MVP) ran up the middle, broke several tackles, and then lateraled to Cade Gorrell, who carried the football the rest of the way to complete a dazzling 49-yard score.

But the Western all-stars then came alive as Dina dashed through the defenders for a 39-yard touchdown.

Then in the fourth quarter, Miller's Malik Flowers, playing his last game at his home field, returned a punt 74 yards to the end zone, drawing the West within 20-12.

However, Nick Wilson took off on a 28-yard touchdown scamper to give the East a 27-12 advantage.

Still, the West group wouldn't quit; Dean hauled in a 20-yard TD pass to pull his squad within 27-20, setting up the frantic finish.

Other local players on the West roster included Jose Reveles and Tajma Magee of Miller and Shawn Franklin, Kyle Edwards, and LJ Bailey of Etiwanda.

----- AT HALFTIME, a special ceremony was held to honor the first inductees into the Inland Valley Sports Hall of Fame.

The first person to be introduced was Dick Bruich, the hugely successful coach at Fontana High School and Kaiser High School, who gave credit to others for his many accomplishments.

"I had a lot of good assistant coaches and a lot of good football players, and I had a great family," Bruich said. "I wouldn't have gotten anywhere without my family."

"They've done something really exciting for kids," Bruich said. "It's given kids a chance to be high school football players one more time."

Joining Bruich in the Inland Valley Sports Hall of Fame were former San Bernardino High School standout Shelton Diggs and sports journalist Louis Brewster. Brewster, a writer for the Inland Valley Daily Bulletin, has been covering sports for more than 40 years, and he began his career as the sports editor at the Fontana Herald News.

----- IN ADDITION, a preliminary game -- the first-ever 215 Football All-Star Classic -- featured some of the best players from small schools in the region, and it also had a spectacular ending.

Frankie Jimenez of Bloomington Christian was on the roster for the San Bernardino County all-stars.

The doubleheader was sponsored by Fontana Mayor Acquanetta Warren, City Councilmember Michael Tahan, and the Fontana Police Officers Association. Miller basketball coach John Romagnoli made arrangements for the game to be held at Miller once again.